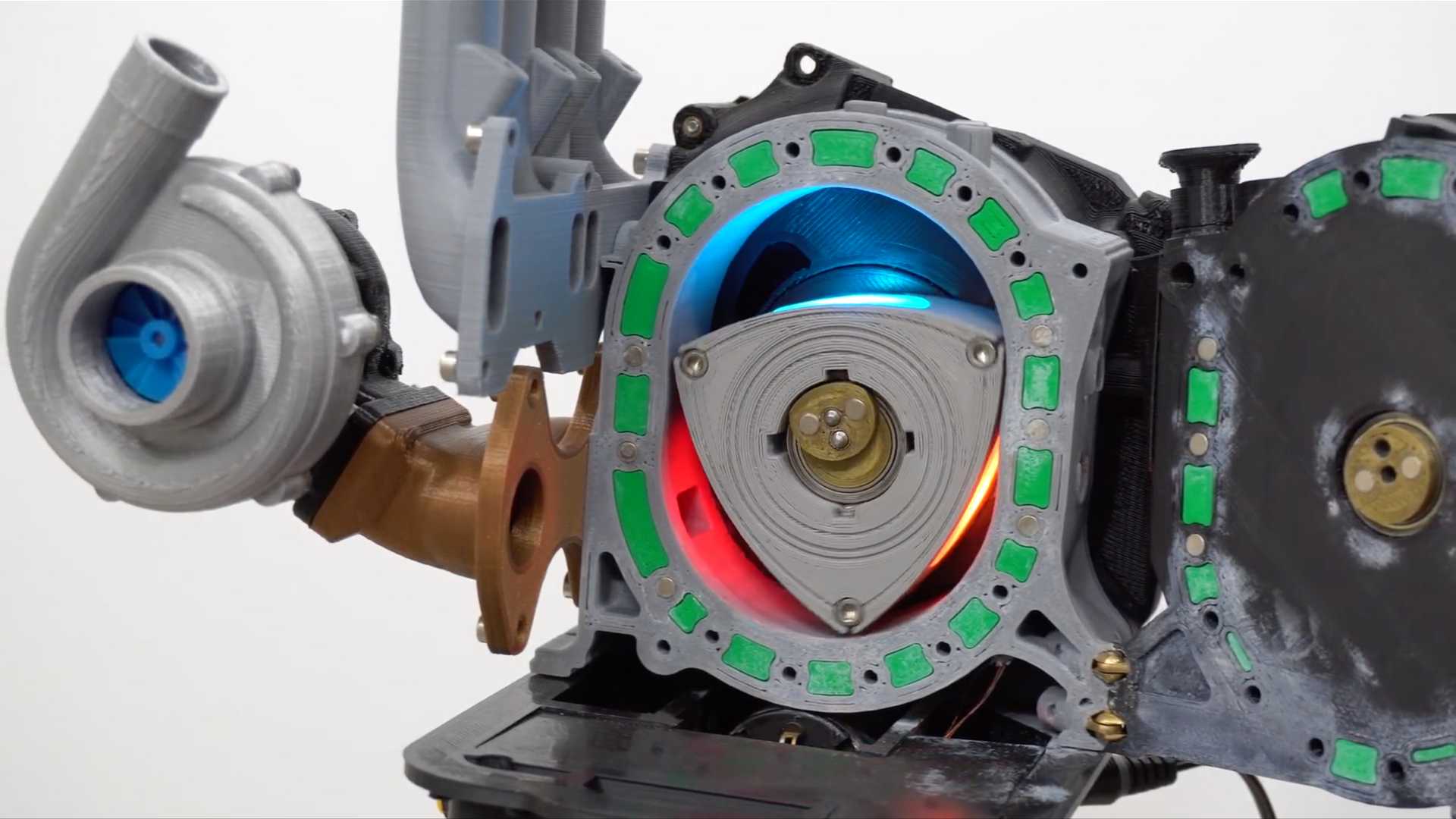 The rotary engine of the vehicle Mazda RX-7 has been the talk of the town since many days now. The techniques and the operations of the engine are said to be quite different from the other engines and it is said to have been introduced as an experiment for future introductions. Wish to know what is so special about it?

The mechanism and the whole patte

are very well described by the host Jason Fenske in the show Engineering Explained lately. The explanation is done with the help of a 3D-printed scale that clarifies the smallest of details to show off how the engine is so much power to offer the best performance. Taking a look at the model can help the viewers know much closely about the new rotary engine.

More About The Engine

The 13B rotary engine of about 1.3 liters has been developed by the Japanese automakers for the vehicle Mazda RX-7. It is said that the development of this engine took a long time such as from the year 1992 till 2002. The engine is equipped with twin turbochargers and is known for its tiny structure. In the 3D-printed scale, the chargers were seen to be about one-third of the size but in real vision, it is just about one cubic. Strangely, the tiny little thing is capable of producing as much as 280 horsepower.

The rotation of the rotor takes place on the eccentric shaft to produce power and send it across to the flywheel and the transmission. When the rotor spins, the rotation process can be noticed because of a light that shows off during the combustion process.

Similar to any other standard engine, here also the rotor is capable of offering four different functions and these are compression, intake, exhaust, and power. When the rotation starts, the air is pulled in the rotor. This air is compressed and then the mixture is ignited by a spark. This produces power for the flywheel and the exhaust is pushed out.

What Makes The Engine Different?

Apart from the features that are mentioned above, there are also many other points that make the rotor engine much advantageous and different than any other engines. The most important thing is to talk about is the ratio of power to weight of the rotor. The engine is capable of producing as much as 280 horsepower due to the rotation technique. Also, the engine is quite simple and this makes the second most advantageous point in it. In addition to these two amazing advantages, also the engine works on rotational inertia that is much different from any other engine working on reciprocating mass. Due to this new technique, the engine is able to produce much higher speeds.

Though there are so many advantages of the rotary engine to make it different, there are also some of the disadvantages that should be talked about. The thermal efficiency of the engine is not good as it experiences low compression ratio. Also, it has a long surface area for heat rejection. The un-bu

t fuel commonly leaves the exhaust and this reduces down the efficiency of the engine to quite an extent.

Apart from these disadvantages, there is a major disadvantage of the engine and this is the bu

ing of the oil. In normal cases, the oil squirters are helpful because it seals the chamber but here in this design the oil is used by the engine. This oil must have been passed by the exhaust and hence this again another point that can limit the efficiency of the engine.

Though the rotary engine, during its introduction, was talked about in a huge way for its advantages, but talking about its disadvantages is equally important. When the points of disadvantages are checked out, it proves the engine to be quite unclean. Due to such limitations in the engine, Mazda has not planned yet for any such sports car with the rotary engine. But it can be expected that the engine design shall soon retu

back in the market with the range extender.