Mumbai: Electric two-wheeler startup Yulu plans to raise up to $100 million to expand its business model and grab a larger pie of the growing last-mile mobility segment.

Yulu, which has created the country's largest battery as a service network with 3 million battery swaps till date, will expand its fleet to 100,000 units by the end of the year from the current 10,000 and open franchise models to reach newer cities and cater to personal buyers in the next one year.

The company has so far raised $30 million in equity capital.

It has an outlay of $100 million in a combination of equity and debt to help accelerate growth.

The company is looking for 10x growth in the coming year, Amit Gupta, founder and CEO of Yulu, told B2B.

“All the tailwinds lead it to usage: Policies, the adoption, which is mainly driven by food and grocery delivery companies, will drive growth,” he said.

The fresh funding round will be done by both new and existing investors.

Most of his fleet was built through in-house capital, but now Gupta intends to do so with debt financing and car leasing where he has a proven track record.

Yulu says it is the largest shared electric mobility platform in the country with three million battery replacements to date. With the expansion of the fleet and new cities, it expects three million exchanges per month by the end of December.

Gupta says that Yulu has a close association with motorcycle manufacturer Bajaj, which has been instrumental in coordinating its future strategy. 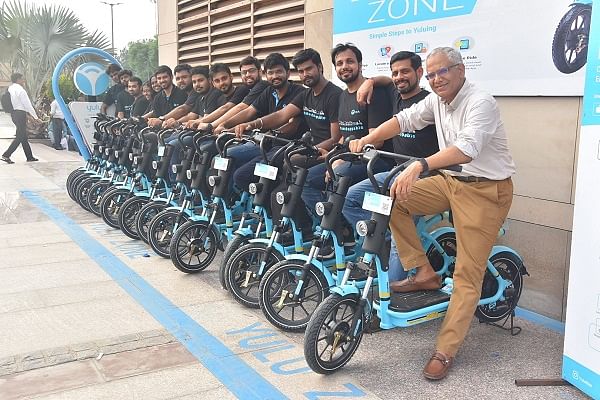 The company will also unveil a new range of electric two-wheelers, both for personal commuting and last-mile commuting, with a fourth-generation battery built on the platform developed by Bajaj Auto.

Unlike imported kits used in the past, all new Bajaj designed and manufactured by Bajaj will be 100% made in India.

Beyond Yulu Dex and Yulu Miracle, a third product called Yulu Express with medium speed to carry a higher payload is in the works for the e-commerce space. There is also one intended for personal shoppers.

"The overall look will be completely different. It will be more engaging, personal and meaty overall. And under the hood, it will be the same trusty set of motors, controllers and battery."

Founded in 2017 by Amit Gupta, RK Misra, Hemant Gupta and Naveen Dachuri to address the needs of cleaner urban commute, it has on board marquee investors including Bajaj Auto, Blume, 3One4, WaveMaker and Rocketship.

Instead of targeting entire cities, Yulu takes a group approach to character tokens to cater to high-demand areas.

It provides Urban Mobility as a Service (uMaaS) in Bengaluru, Mumbai, and Delhi-NCR, which will expand to 10 locations, including other major metropolitan areas and Tier 1 cities.

Yulu believes that India has the largest potential market for micromobility, with the top 10 cities alone offering $26 billion in business potential.

In fact, the final delivery market in 2021 was $5.4 billion. With just 10% of cargo transportation revenue earned last year, Yulu hopes to increase to 80% next year. The company is likely to generate $100 million in revenue this fiscal year.

With rising fuel rates and the cost of vehicle ownership, the adoption of electric vehicles is expected to accelerate. Yulu bikes are not only 50% cheaper than motorized ATVs, they are also 50% faster than cars in traffic.

The company says that travel on the Yulu is 35% cheaper than its petrol counterparts and cleaner too. Yulu claims to have helped save more than 10,000 metric tonnes of CO2 emissions so far.

In terms of plans to get to last-mile, three- or four-wheel passenger vehicles, Gupta admitted it was an attractive space and something the board had already considered but not one that was part of its immediate roadmap.